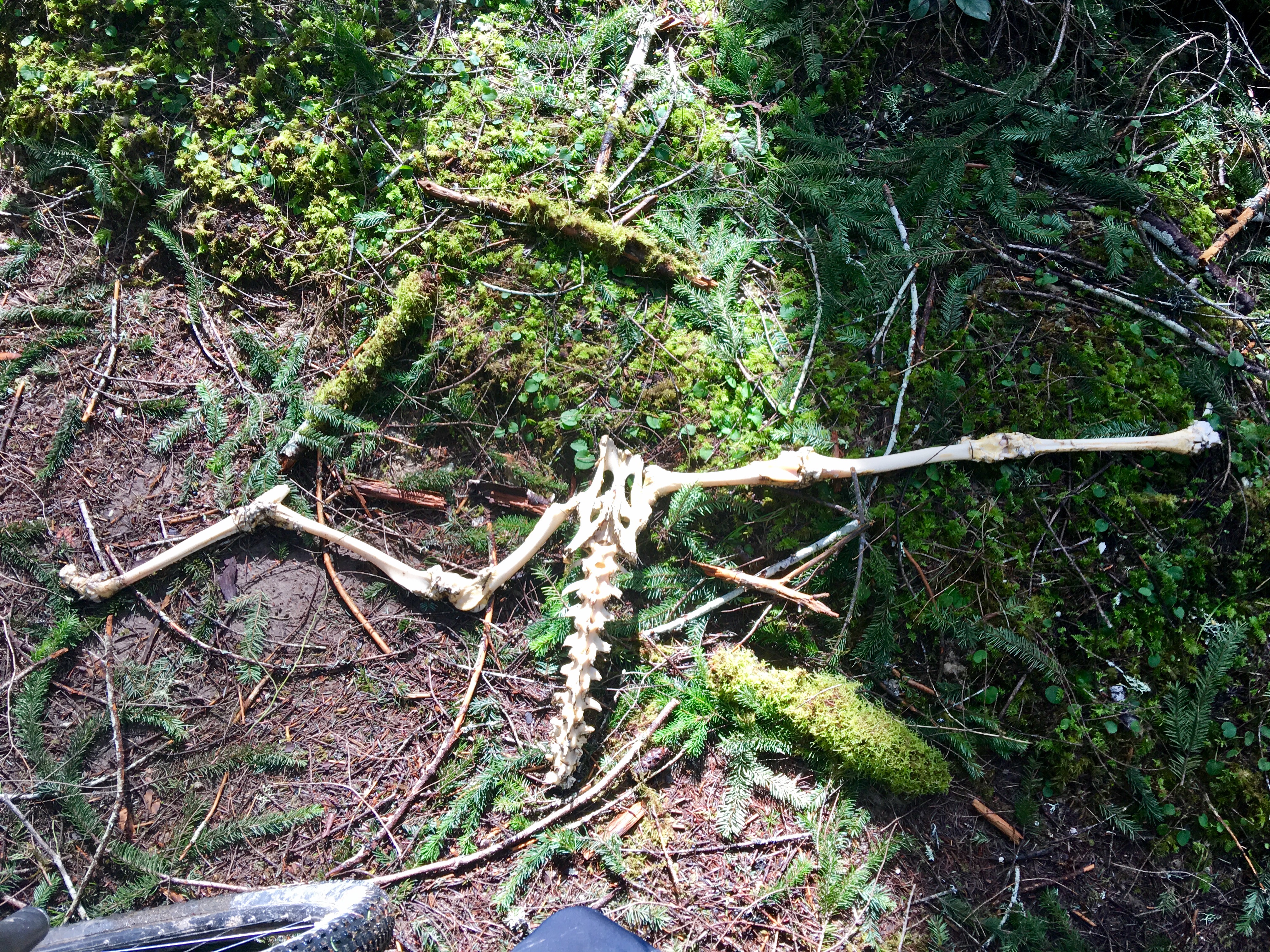 Dublin and I went for a mountain-bike ride on the Triple C and Gales Creek trails out of Reehers Camp this weekend, and encountered the most interesting thing I’ve ever seen on a bike ride.

Dublin has been itching to get out on a good mountain bike ride for a while now, but it’s been hard to find a good day to do so, since he doesn’t quite have the gear to go riding in nasty weather (and that gear is too expensive to buy for someone who will outgrow it within the year!) Finally, on Sunday, we were blessed with the perfect mountain-biking weather, so we decided to get out there.

The problem is that our usual spot, the trails up at Stub Stewart State Park really suffered from the winter storms this year and are not yet cleared for riding. Being relative noobs at mountain-biking, I wasn’t sure where to go, so I solicited suggestions from the unpaved mailing list. Ultimately, we decided to check out the Triple C Trail and part of the Gales Creek Trail out of Reehers Camp.

Cochran Rd—the road out of Timber that leads to Reehers—is basically a giant mud bog, which made it fun to get my low-slung Civic to the trail head parking lot; thankfully a lot of the skills I learned while four-wheeling my old FJ are applicable even to (even more to?) less-capable vehicles, and we made it with nothing more than a single, cringe-worthy scraping down the middle of the car’s belly with some muddy gravel. It made me wonder how the trails would be, but it turned out that the road was just about the only mud we would see. (From the looks of a few of the worst spots on the road, I’d put the blame on the kind of off-roading assholes that think it’s fun to spin their truck tires in mud pits and ruin the roads and 4x4 trails for everyone else.)

We started off with an anti-clockwise trip around Triple C. The beginning of the trail was a bit hard to find thanks to some recent blow-down, but once past that point, the rest of the trail was almost entirely rideable…if you were careful. Pretty much all of the large blow-down was removed, but there was a lot of smaller branches all over the trail just waiting to cause an inopportune traction-loss or to snag a derailleur.

I wouldn’t call the Triple C trail spectacular as a destination, but it was nonetheless a fun, beginner-level trail with enough of a climb to be a nice (part of) a workout and a good warm-up to the Gales Creek Trail (especially since it loops around to a spot fairly close to the parking lot in case you realize you forgot something at the car, which happens more than I’d like to admit.) The end of the trail is a little nicer, as it follows along the north bank of the Nehalem River.

After finishing the Triple C, we crossed the road and picked up the Gales Creek Trail. The first part of the trail (up to its intersection with the Step Creek Trail) was in slightly worse condition than the Triple C, but it was mostly rideable. This trail requires a little more skill than the Triple C, but it’s still pretty beginner-friendly. Some parts of the climb were a little too much for Dublin (whose bike-weight is about a third of his body-weight) and required some pushing, but not to the point where he didn’t enjoy it.

Not too far in to this part of the trail, we came across a really cool looking skeleton:

It was pretty fresh; the bones looked like they had only been picked clean within the last day or so, and they still had all the tendons connecting them intact. The span of the limbs was about four or five feet. I’m not sure what animal it came from, but it looked like there maybe were hooked claws at the end of one of the limbs (missing on the other). I’ve never seen anything like that before (in the wild), so this alone made our trip worthwhile. It’s too bad my sister wasn’t there with something in which to collect this, as it would be right up her alley.

When we got to the junction with the Step Creek Trail, we thought we’d try to take that back to the parking lot, but the blow-down was really bad. We encountered a group of hikers stopped on the trail having lunch, and they said they had given up after trying to make it through and encountering a big snag with no good way around it just a bit further down. We backtracked, hoping that the double-track we had just crossed would similarly lead back to Cochran Rd, but it dead-ended just a little further on. So we turner around and decided to pick up the Gales Creek Trail just a little further south and then take it back down to where we started. This more-southern section of the Gales Creek Trail was not nearly as clear as the lower section, and it ended up being almost as much hiking as biking.

Crossing the road back to the part of the Gales Creek Trail we had already come up, we enjoyed a fun and fast descent back down to Cochran Rd and the parking lot at Reehers.

It was a lot of fun to explore some new trails, especially ones that are so close to home. I look forward to checking out more of the Gales Creek Trail a little later in the season, once it’s been cleared (and we will probably see about volunteering to help make that happen, too.) There was a volunteer crew with a base-camp at Reehers, so they are actively working on this area.