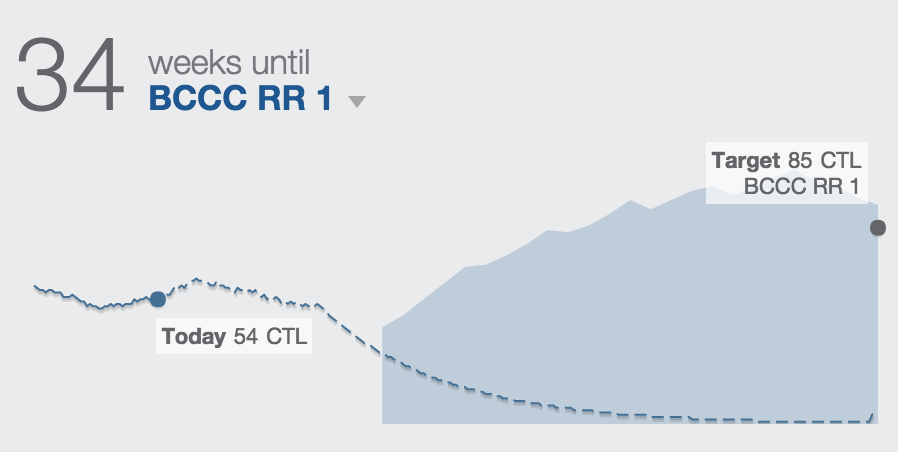 My goal between now and the end of the year is to maintain a moderate amount of fitness and to get my weight and body-fat percentage within a range that I think will set me up well to hit my ultimate racing-weight goal. Cyclocross is helping to maintain the fitness, but I’m struggling (as usual) with the diet.

The “real” training1 for Baker City Cycling Classic doesn’t start until January, but that doesn’t mean there is no training going on in the mean time. After all, I certainly don’t want to lose all of the fitness gained from my 2017 season. My goal between now and the end of the year is to maintain a moderate amount of fitness—so that it is not a total shock to the system when training starts back up in earnest come January 1st—and to get my weight and body-fat percentage within a range that I think will set me up well to hit my ultimate racing-weight goal (170lbs and <= 15% body-fat). I think that, if I can get down to 180lbs and <= 20% body-fat by the beginning of December, that will help reduce the expected back-slide on those numbers from the winter holiday season and planned two-week break from training at the end of the year.

The training side of things went pretty well this past week. On Tuesday and Thursday, I completed both of my harder interval sessions on the indoor trainer. On Tuesday, the plan called for an endurance ride of about an hour, but the weather was looking nice, so I decided to get outside on the cross bike and hit a few flat gravel roads in the area. I kept my heart rate in zone 2 as much as I could, being careful to let my legs recover enough as not to interfere with the following day’s interval session. Thursday’s interval session took a lot of me thinking, “come on, you can do anything for one more minute” in order to make it through the whole session, and I was pretty cooked by the following day. I ended up skipping Friday’s workout and even throttling back my planned workout/opener for Saturday in order to avoid being overcooked for Sunday’s cross race. I think I made the right call here, and I’ll be adjusting the remainder of my 2017 training plan to follow suit.

Racing cross this year is already showing that it is going to have a big impact on my overall training. Never before have I pushed myself to go quite so deep into the pain cave as I seem to do during a cross race. Not only is the nature of the race (short, lots of turns and terrain changes that force constant accelerations, etc) such that it requires a lot of intense effort, but the fact that the course is lined with cheering (and heckling!) teammates and others from the local racing community really helps push me to perform in ways that I lack the motivation to do in most road races. Cross also has a nice aspect of the race being about personal achievement (Did you give it everything you had? How skillfully were you able to ride the technical sections?) as opposed to road races where—once you lose contact with the main field—there is sometimes very little to motivate you to go faster or ride it better, because only the top 10 spots really matter. By looking at the data after each race and seeing just how hard I can really go when motivated, I seem better able to go deep in my high-intensity interval workouts on the trainer. I already know I really can do it, so I am not able to use general capability as an excuse to cut a workout short. Hopefully, the more I accustom myself to pushing through the discomfort like that, the more I will be able to dig in and make the sometimes painful efforts that make the difference between finishing with the field or getting dropped come road-racing season.

As part of trying to get my weight and body-fat percentage where I want them to be, I am once again trying to do the MyFitnessPal thing and tracking all of my food. I’m admittedly bad about following any kind of diet plan. It’s especially hard on rest days, because there tends to be a pretty large difference between the number of calories I burn on a rest day vs. the rest of the week, but my appetite tends not to compensate. Interestingly, it’s not only harder to keep my net calories in line; it’s also much harder for me to make healthy choices about the kinds of food I eat on rest days. I think what happens is I see that I’m inevitably going to go over my daily calorie goal (because my stomach will be growling at me to eat), and then I convince myself that I might as well not even bother with today and can just start over tomorrow. I’m going to try to be more mindful of that this week and attempt to eat healthier, more nutritious foods even when I’m “blowing my diet” in terms of overall calories for a given day. As they say, “two wrongs don’t make a right,” and if you are going to over-eat, it is still better to do so while consuming healthy foods.

The other thing I plan to do is stop paying so much attention to my daily weight and body-fat percentage. My body weight, especially, tends to fluctuate pretty wildly within the scope of a week, by as much as three or four pounds in each direction due to the specifics of what I’ve eaten, how much water I’ve drank or lost while exercising, or even differences in waste-elimination. Instead of focusing on each day’s numbers, I am going to try just recording the numbers each morning without looking at them (thanks to a scale that will upload the data automatically) and then, on Mondays, record my average weight and body-fat percentage for the previous week. What I hope to see is a steady march toward my goals while removing the negative feedback of the occasional heavy day that I, personally, find quite discouraging.